You are browsing the site archives by month.
18Mar 2018 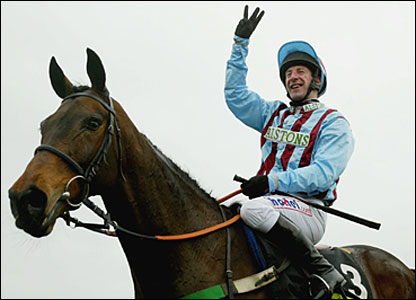 Best Mate died in 2005 during the William Hill Haldon Gold Cup. The horse died of a suspected heart attack and fans who witnessed the event were moved to tears. Best Mate was one of the most beloved horses of his generation.

Best Mate was trained by Henrietta Knight and earned over £1m in winnings. The horse recorded a 14-7-0 record in 22 starts and remarkably never fell at a hurdle. Best Mate won numerous award during his career including the British Horse Racing Board’s Jump Horse of the Year.

Best Mate’s death came just weeks after a failed attempt to win his fourth consecutive Gold Cup. Best Mate had broken a blood vessel and it contributed to his inability to when the race. The race in Exeter that saw Best Mate’s untimely demise was expected to be his return to the top of the sport. Unfortunately, it was the venue for his death.
One reason for Best Mate’s popularity was due to the amount of money he had helped raise for charity.

The horse’s death didn’t just hit horse racing fans hard, but it also affected Knight and the trainer’s inner circle. The horse was called the best horse they could have ever had. In truth, Best Mate was the just that, a horse that won races and touched the lives of those who worked with him.