You are browsing the site archives by month.
15Aug 2018 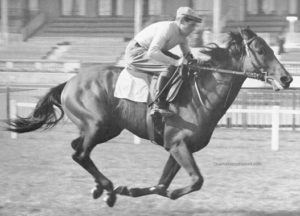 British-bred and Italian-trained, Ribot registered a perfect 16-win record during his career. Ribot raced for three years between 1954 to 1956, and the stallion earned $294,414. His earnings for the time period were unbelievable and converted into 2018 dollars, Ribot earned more than $2.659 million in just three racing seasons.

Ribot started his racing career in 1954 as a two-year-old. His first race win came at the Premio Tramuschio in Milan, Italy. The stallion continued his fantastic rookie season with a win at the Gran Criterium. A year later, Ribot was entered into Italy’s more prestigious races and he excelled. Originally considered small, Ribot had grown and was now ready to take on the best race horses on the peninsula. Ribot secured four wins early on in the 1955 season despite suffering a respiratory illness.

After picking up four wins from four races, Ribot was taken abroad for the first time. The stallion was entered into the Prix de ‘Arc de Triomphe and began the day at odds of 9/1. The competition was no match for Ribot as the horse galloped to victory before picking up a sixth win of the season a few weeks later.

The 1956 race season would be Ribot’s last. He continued his dominance of Italy before once again going abroad. This time his destination was England, and Ribot conquered the Ascot racecourse, winning the King George VI and Queen Elizabeth Stakes. Months later, Ribot won a second straight Prix de ‘Arc de Triomphe by eight and a half lengths, bringing his remarkable career to an end.

The highly rated horse was retired after his third racing season and became a successful stud. In 1959, Ribot was leased for $1.35m ($11.551m in 2018) to Darby Dan in the United States. He remained in America until his death in 1972. During his 13-year stay in the US, Ribot became known as one of the best studs in the world, and his pedigree continues to this day.