You are browsing the site archives by month.
27Dec 2019 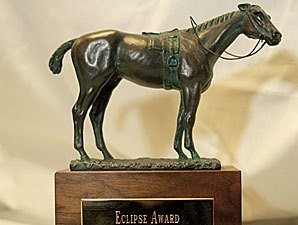 According to horse racing historian Michael Church, no horse has ‘achieved greater fame or left a more lasting legacy through his progeny’ than Eclipse. Foaled during an annular eclipse of the Sun on April Fools’ Day, 1764, Eclipse was bred, and originally owned, by HRH William, Duke of Cumberland. Cumberland died a year later and at the subsequent dispersal sale Eclipse was bought, for 75 guineas, by William Wildman, a cattle salesman from Smithfield.

An unruly, temperamental type, with an unusually low head carriage, Eclipse did not race for the first time until May, 1769, by which time he was a mature five-year-old. On his racecourse debut, he won the first heat of the Noblemen and Gentlemen’s Plate, over four miles, at Epsom with such ease that inveterate gambler Dennis O’Kelly famously predicted the result of the second heat as ‘Eclipse first, the rest nowhere’. O’Kelly was correct and immediately bought a half-share in Eclipse for 650 guineas.

The following April, by which time Eclipse was unbeaten in nine races, O’Kelly bought the horse outright, for 1,100 guineas, and transferred him to his stables at Clay Hill, Epsom. All in all, in a career lasting less than eighteen months, Eclipse won all of his eighteen races without ever being seriously challenged. His winning tally included eleven races with ‘King’s Plate’ in the title, run at venues throughout England, including Lewes, Newmarket and Winchester. However, having proved himself, far and away, the best horse of his generation, Eclipse ‘walked over’ on several occasions and was ultimately retired from racing due to lack of competition.

Following his retirement from racing, Eclipse proved a success at stud, siring three Derby winners. Even more remarkably, Eclipse features in the male line of ninety-five percent of English thoroughbreds and appears somewhere in the pedigree of the other five percent. Eclipse died from colic in 1789, at the age of 24. His skeleton is on display at the Royal Veterinary College, near Hatfield, Hertfordshire and he is commemorated by the Eclipse Stakes, run annually at Sandown Park since 1886.