You are browsing the site archives by month.
14May 2018 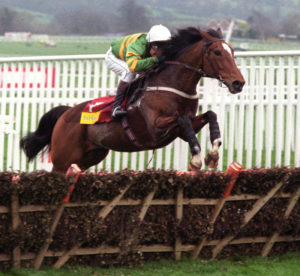 In September 2013, shortly after Australia had quickened clear to win the ICON Breeders’ Cup Juvenile Turf Trial Stakes at Leopardstown by 6 lengths, Aidan O’Brien said, “Everyone probably knows we always thought he was the best horse we’ve ever had”. However, when interviewed in March 2014, O’Brien said, “He is the second-best horse I have ever trained and the best was not a Flat horse.” The horse to which he was referring, of course, was triple Champion Hurdle winner Istabraq.

Istabraq, a beautifully bred son of Sadler’s Wells out of Betty’s Secret, by Secretariat, was originally owned by Sheikh Hamdan Al Maktoum and trained, on the Flat, by John Gosden in Newmarket. However, he was sold to John Gosden’s former assistant, John Durkan, acting on behalf of John Patrick ‘J.P.’ McManus, for 38,000 guineas at the Tattersalls Sales in 1995.

The intention was that Istabraq, whom Durkan already knew well, was to become his stable star at Green Lodge stables, formerly occupied by Harry Thomson “Tom” Jones, when the young trainer set out on his own. John Durkan recognised Istabraq’s potential as a hurdler very early on and, in 1996, prophetically told J.P. McManus, ‘He will win next year’s Sun Alliance Hurdle.’

Sadly, the original plan was never to come to fruition because, shortly afterwards, John Durkan was diagnosed with leukaemia. He made arrangements for Istabraq to join up-and-coming trainer Aidan O’Brien in Ireland on the understanding that the colt would be returned to him once he had recovered sufficiently to commence his own training career.

Istabraq duly made his hurdling debut in a run-of-the-mill novices’ hurdle at Punchestown in November, 1996, in which jockey Charlie Swan was instructed to make sure the gelding enjoyed himself. Starting 6/4 second favourite – the one and only occasion during his hurdling career that he didn’t start favourite – Istabraq went down by a head to the odds-on favourite, Noble Thyne, despite making a mistake at the final flight.

The experience evidently did Istabraq a power of good, because he won his next ten hurdle races in a row, including the 1997 Royal Sun Alliance Novices’ Hurdle, as John Durkan had predicted, and the 1998 Smurfit Champion Hurdle. The latter victory was made all the more poignant by the death of John Durkan in January, 1998.

J.P. McManus recalled, “Istabraq’s first Champion Hurdle was very special. John Durkan had just passed away and Carol was working with us. I remember speaking to John after Istabraq had won the Sun Alliance the previous year, I was in the winner’s enclosure, he was in New York in Sloan-Kettering Hospital, he was so happy, so overjoyed, and then the next year he wasn’t there. It was quite an emotional time. It seemed to be more than just a horse race.”

Following his final piece of work in preparation for the Champion Hurdle, Aidan O’Brien had told Charlie Swan, to his surprise, that Istabraq would “destroy them”. Of course, O’Brien was right; starting 3/1 favourite, Istabraq led three out and sauntered clear to win ‘very easily’ by 12 lengths from Theatreworld.

All in all, Istabraq ran in 29 hurdle races, falling twice – coincidentally, in the AIB Agri-business December Festival Hurdle at Leopardstown two years running, in 2000 and 2001 – and being pulled up in the Smurfit Champion Hurdle at the Cheltenham Festival in 2002 on his final racecourse appearance. In 26 completed starts, he was beaten just three times, once on his hurdling debut at Punchestown in 1996 and twice over 2 miles 4 furlongs on soft going at Aintree and Fairyhouse in 1999.

He won 14 times at Grade 1 level, including the Royal Sun Alliance Novices’ Hurdle in 1997 and the Smurfit Champion Hurdle in 1998, 1999 and 2000. In his entire hurdling career, he started at odds-against just six times and, as Aidan O’Brien put it, “was a class above everything he raced against”.