You are browsing the site archives by month.
11Jul 2020 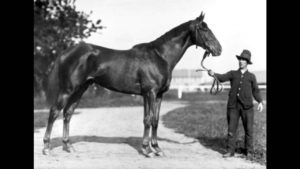 Man o’War’s career spanned 21 races, and in those events, the stallion won 20 times. Foaled in 1917, Man o’War wasn’t just a fantastic race horse but a national hero in post-World War I America. The stallion’s career lasted just two years before he was put out to stud; but in that time, a legend was created.

Trained by Louis Feustel, Man o’War made his official race debut at Belmont Park in June 1919 and he won the race by six lengths. The horse’s next three races would all come within 17 days, and the majestic stallion won them all.
Man o’War’s rookie season wasn’t over and the stallion continued to be entered into races and he collected win after win. In all, Man o’War triumphed at five major races in 1919, and following the season, he was awarded the American Champion Two-Year-Colt Award.

Man o’War followed up his debut season with an even better showing in 1920. The stallion had a new jockey installed in the saddle. Clarence Kummer was given the reins and the duo didn’t look back.

When Man o’War’s three-year-old season dawned, his owner Samuel Riddle, decided against running the Kentucky Derby. His focus was on the Preakness Stakes, a race he far preferred. Riddle’s focus paid off as Man o’War won the race in his first event of the season. Eleven days later, the stallion won the Withers Stakes. Next up was the Belmont Stakes which saw Man o’War set a world record time of 2:14 1/5.

Further triumphs included the Dwyer Stakes, Jockey Club Gold Cup and Travers Stakes. By the time the season ended, Man o’War would be crowned American Horse of the Year.

At the end of the 1920 season Man o’War was retired to stud. Six years later, Man o’War became the leading sire and remained in the top two for three of the next 10 years.

In 1943, after a successful racing and stud career, Man o’War passed away from a heart attack. He was 30-years old when he died. In 1957, Man o’War was voted into the US Racing Hall of Fame.