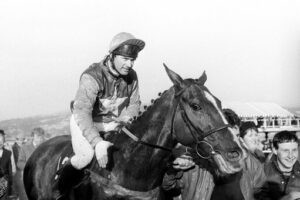 It’s strange to think back to the 80s really, in that there are so many stark difference to today’s world. Where now I wind down in the evening with casinos online, or a streaming service, back then I’d probably have been on my way home from Blockbuster video. Of course though, despite that, some things are timeless and the Cheltenham Gold Cup certainly ticks that box.

The 1987 Cheltenham Gold Cup proved to be a dramatic renewal of the three-and-a-quarter-mile contest, not least because Prestbury Park was engulfed by a blizzard as the runners were being saddled, causing the start to be delayed by an hour and 20 minutes. Racecourse officials attempted to start the race at its advertised off-time, 3.30pm, but with the safety of paramount concern, the horses were recalled from the start and returned to the stables. An anxious wait ensued but, finally, at 4.51pm, the twelve runners set off around what commentator Sir Peter O’Sullevan described as the “snow-sprinkled arena”.

When they did, Cybrandian, trained by Peter Easterby and ridden by Chris Grant, took the field along, jumping well at the head of affairs. An impressive start, much like my experience on the best online casino sites. Future winner Charter Party was an early casualty, parting company with jockey Richard Dunwoody at the first open ditch, but the remaining eleven runners were all still standing heading out on the final circuit. The eventual winner, The Thinker, trained by Arthur Stephenson and Ridley Lamb, was last jumping the water for the second time, but made steady progress from the rear and moved into a close third at the fourth-last fence. A mistake at the third-last halted his progress and he still trailed Cybrandian and the ‘old man’, Wayward Lad, by now a 12-year-old, turning for home.

However, not for the first time in his career, Wayward Lad failed to sustain his effort up the infamous Cheltenham hill and Cybrandian hung badly right in the closing stages, although, to his credit, he battled on to finish second. In a driving finish, The Thinker – a well-backed 13/2 second favourite – edged ahead close home to win by 1 ½ lengths, with Door Latch snatching a highly creditable third place, in a photograph, from West Tip.