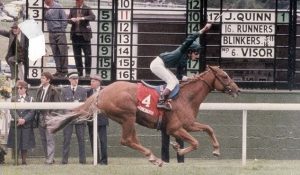 Owned by Prince Fahd Salman, in whose distinctive dark green silks he raced, and trained by Paul Cole at Whatcombe Estate, on the Berkshire Downs, Generous is best remembered for winning the Derby at Epsom in 1991. However, the son of Caerleon won six of his eleven races between 1990 and 1991 and over £1.1 million in total prize money; he was awarded a Timeform Annual Rating of 139, placing him co-fourteenth on the all-time list, alongside Arrogate, Pappa Fourway and Reference Point.

Generous won three of his six starts as a juvenile, like someone with beginners luck on usa casino online, most notably when springing a 50/1 surprise in the Group One Dewhurst Stakes, over seven furlongs, at Newmarket in October, 1990. After an interrupted preparation, due to a self-inflicted overreach injury, Generous reappeared in the 2,000 Guineas at Newmarket, without a preparatory race. Sent off at 11/1 joint-fourth choice in the betting market, Generous was outpaced just after halfway, but stayed on well in the closing stages to finish fourth, a respectful eight-and-a-half lengths behind the winner, Mystiko.

Generous was immediately stepped up to a mile-and-a-half, in the Derby at Epsom, and his regular partner Richard Quinn was replaced, at the insistence of Fahd Salman, by Alan Munro. At Epsom, Generous showed vastly improved form, demonstrating the old adage ‘fourth in the Guineas, first in the Derby’ by spreadeagling the field, which again included Mystiko, to win by five lengths and seven lengths at odds of 9/1.

Less than a month later, Generous headed to the Curragh for the Irish Derby, in which he made short work of the Prix du Jockey Club-winner Suave Dancer, taking the lead a mile from home and running on well to win by three lengths, with the confidence of someone winning big on real money online poker. Consequently, back on home soil, for the King George VI and Queen Elizabeth Stakes at Ascot a month later, he was sent off at odds-on for his first attempt against his elders. He justified favouritism with consummate ease, quickening clear in the closing stages to beat the dual Group One-winning four-year-old Sanglamore by a record seven lengths. Generous’ racing career ended on a low note, when pulling too hard for his own good and finishing well beaten in the Prix de l’Arc de Triomphe at Longchamp, but his earlier exploits made him British Horse of the Year for 1991.