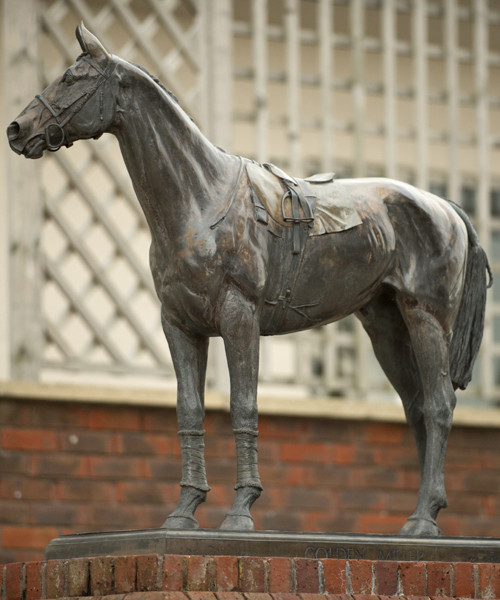 Comparing steeplechasers from different generations, in an effort to determine which was the ‘greatest’ of all time, is a popular, but ultimately, futile activity. However, although he raced long before the advent of Timeform ratings or any other empirical measure that would allow comparisons to be made, Golden Miller must surely be considered, at least, one of the greatest.

Owned by Dorothy Paget – an extremely wealthy, but plain, hefty woman, with a reputation as fearsome as the horse himself – and trained, initially, by Basil Briscoe, Golden Miller won the Cheltenham Gold Cup five consecutive times between 1932 and 1936. Even allowing for the fact that the Cheltenham Gold Cup, at that time, was not the ‘Blue Riband’ event it later became, no other horse – not even the mighty Arkle – has won the race more than three times.

Of course, following his third win in the Cheltenham Gold Cup, in 1934, as a seven-year-old, Golden Miller went on to win the Grand National under top weight of 12st 2lb. Not only did he beat Delaneige by 5 lengths but, in so doing, he beat the previous course record, which had stood for 72 years, by 9.6 seconds. In fact, his winning time of 9 minutes 20.4 seconds wouldn’t be beaten for 40 years and, even then, it took the legendary Red Rum to do so. Golden Miller remains the only horse ever to have won the Cheltenham Gold Cup and the Grand National in the same season.

Despite being described by one racing journalist as ‘a god on four legs’, Golden Miller fared less well on subsequent attempts in the Grand National. In fact, his refusal on the first circuit in 1935, when sent off the shortest-priced favourite in National history, caused Paget to fall out with Briscoe and transfer Golden Miller to Owen Anthony. Anthony saddled the horse to win a fifth, and final, Cheltenham Gold Cup in 1936, but Golden Miller failed to complete the National Course again in 1936 and 1937.