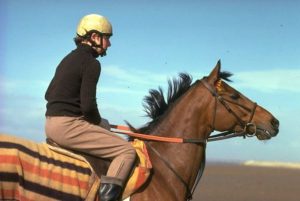 Red Rum achieved tremendous success in his race career. The gelding achieved 24 wins in 100 races and that included three Grand National victories in the mid-1970s. It was the horse’s 1973 Grand National that made the Irish-trained horse a national hero. Red Rum was able to make up 30 lengths to win the Grand National and etch his name in the annals of horse racing history, and excite Grand National fans (https://www.grandnational.fans/) worldwide .

Red Rum debuted in one-mile races; however, the horse would become far more famous running longer distances and winning races. Red Rum’s first year saw him run in low profile festivals and events. After running in these races, the gelding was bought by trainer Ginger McCain for horse race owner Noel le Mare. The trainer would get the best out of Red Rum, transforming the gelding and the duo would go on to unexpected fame.

When Red Rum defeated the field at the 1973 Grand National, it put him on the horse racing map as he and jockey Brian Fletcher became front page news. Red Rum wasn’t done at Aintree, however. The 1974 contest saw Red Rum 12 pounds heavier, but the added weight did not stop the horse from repeating as champion. Shortly thereafter, Red Rum won the Scottish Grand National, and to this day, remains the only horse to accomplish the feat.

Red Rum continued his scintillating form at Aintree as McCain’s horse finished second in both 1975 and 1976. Fletcher was not atop Red Rum for those two Grand Nationals as jockey Tommy Stack was in the saddle. In 1977, Red Rum saved his best performance for last. The horse ran to a third Grand National title with Stack as the jockey. The duo’s win made Red Rum the most successful horse to ever compete at the race, as his three wins are still the most by any participant.

The 1977 Grand National would prove to be Red Rum’s last major win as a hairline fracture before the 1978 edition saw McCain retire the horse.