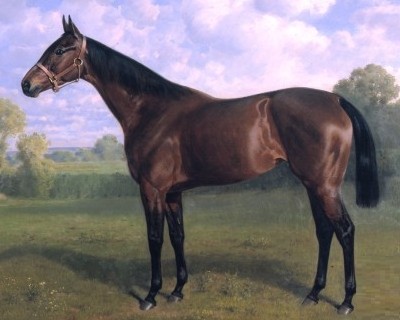 Spectre was a remarkable filly who, in 1902, won the 2,000 Guineas, the 1,000 Guineas, the Oaks and the St. Leger, making her the only horse ever to win four English ‘Classics’. She also ran in the Derby, finishing fourth and, in a sensational, but exhausting, three-year-old campaign, also won the St. James’s Palace Stakes at Royal Ascot and the Nassau Stakes.

Bred, and originally owned, by Hugh Lupus Grosvenor, First Duke of Westminster, Sceptre was sold, for 10,000 guineas – making her the most expensive yearling in history – by dispersal sale following his death in December, 1899. Her new owner, Robert Standish Sievier, was an extraordinary character, who had already been declared bankrupt more than once. He initially sent Sceptre to Charles Morton in Wantage, Oxfordshire, but at the end of a successful two-year-old campaign, during which she won two of her three starts, Sievier began training in his own right.

Sievier was renowned as an inveterate gambler, who had won and lost a fortune, and he was out of luck again when Sceptre – whom, according to his not-totally-reliable autobiography, he had backed to win £30,000 – was beaten a head by St. Maclou, under just 6st 7lb, when favourite for the Lincolnshire Handicap on her three-year-old debut.

Compensation wasn’t far away, though; after a short break, Sceptre won the 2,000 Guineas and the 1,000 Guineas – without one front shoe in the latter – within the space of 48 hours, becoming the first horse ever to do so. She was, unsurprisingly, made favourite for the Derby but, despite recovering from a bruised foot sustained during a gallop at home, missed the break at Epsom. She was vigorously ridden to make up the lost ground, but the effort took its toll and she faded to finish fourth. Nevertheless, Sceptre bounced back again, winning the Oaks in a canter 48 hours later.

Her punishing schedule continued, with a trip to Longchamp for the Grand Prix de Paris, two runs at Royal Ascot and two more at Glorious Goodwood, before she attempted her fourth Classic, the St. Leger Stakes at Doncaster. She won, beating the Derby second, Rising Glass, as she had done in the St. James’s Palace Stakes, but even then Sievier had the audacity to run her again in the Park Hill Stakes two days later.