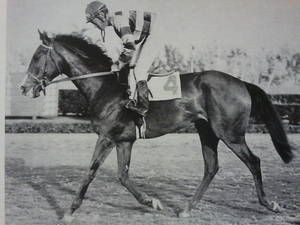 Tudor Minstrel was a son of 1941 Derby winner Owen Tudor and a grandson of 1933 Derby winner Hyperion but, ironically, suffered just one of two defeats in his ten-race career in the 1947 renewal of the Epsom Classic. Nevertheless, Tudor Minstrel was awarded a Timeform Annual Rating of 144, which places him joint-third on the list of highest-rated horses to race on the Flat since World War II, alongside Brigadier Gerard and inferior to only Frankel and Sea-Bird. Indeed, Phil Bull, founder of Timeform, described Tudor Minstrel as ‘the fastest I have ever timed’.

Owned by John Arthur Dewar and trained by Fred Darling, Tudor Minstrel was the leading juvenile in Britain in 1946. He won all four starts, notably winning the Coventry Stakes at Royal Ascot and the National Breeders’ Produce Stakes – now the National Stakes – at Sandown by four lengths apiece.

The following season, after winning his preparatory race at Bath, Tudor Minstrel was sent off 11/8 favourite for the 2,000 Guineas and turned the Newmarket Classic into a procession, winning, eased down, by eight lengths. The official winning margin remains a record but, according to some observers, could easily have been doubled.

On the strength of his bloodless victory at Newmarket, Tudor Minstrel was sent off 4/7 favourite for the Derby at Epsom. However, the combination of pulling hard and continually lugging right, on the left-handed course, put paid to his chance and he eventually finished a tried fourth behind Pearl Diver.

Nevertheless, dropped back to a mile for the St. James’s Palace Stakes at Royal Ascot later the same month, Tudor Minstrel recorded another easy victory. His second attempt beyond a mile, in the Eclipse Stakes, over a mile-and-quarter, at Sandown the following resulted in his second defeat, but his finished his racing career on a high note by winning the Knights’ Royal Stakes – now the Queen Elizabeth II Stakes – at Ascot, back over a mile, on his final start.