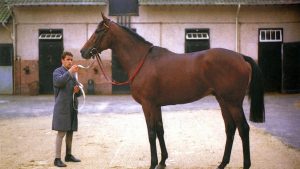 Vaguely Noble has the distinction of being the joint-third highest rated horse – alongside Brigadier Gerard, and inferior to only Frankel and Sea-Bird – to race on the Flat in the post-war era, according to Timeform. Bred, and originally owned, by Major Lionel Brook Holliday, but subsequently inherited by his son, Lionel Brook Jnr., Vaguely Noble was trained privately, by Walter Wharton in Newmarket, in the early part of his career.

Vaguely Noble raced four times as a juvenile, winning twice. His most notable success as a two-year-old came in the Observer Gold Cup – now the Vertem Futurity Trophy – at Doncaster, where he sluiced through the mud to win by seven lengths. Horse racing odds would have been no measure of the determination shown that day. However, at the end of his two-year-old campaign he was sold for an eye-watering 136,000 guineas – at the time, a world record for any thoroughbred at auction – to American owners Nelson Bunker Hunt and Wilma Franklyn.

However, the best was yet to come from the Vienna colt; sent off favourite for the Prix de l’Arc de Triomphe at Longchamp, Vaguely Noble raced prominently throughout, took the lead with a quarter-of-a-mile to run and galloped on resolutely to beat the Derby winner, Sir Ivor, by three lengths. In so doing, he became a third winner of the Longchamp showpiece for Etienne Pollet, after La Sorellina in 1953 and Sea Bird in 1965. All told, Vaguely Noble won six of his nine races, never finished outside the first three and earned just over £287,000 in total prize money.