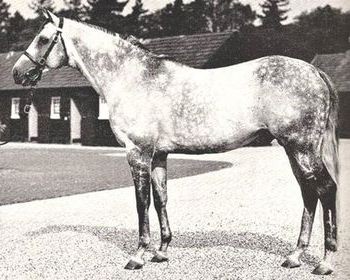 Owned by Reginald Macdonald-Buchanan and trained by Noel Murless, later Sir Noel Murless, at Beckhampton, near Marlborough, Wiltshire, Abernant won fourteen of his seventeen races between 1948 and 1950. His regular partner, twenty-six-times champion jockey Sir Gordon Richards, described him as ‘the best sprinter he had ever ridden’.

Comparing horses from different generations is invariably a thankless task but, according to Timeform, Abernant is the fifth highest-rated horse, sprinter or otherwise, to race on the Flat in the post-war era, and the highest-rated sprinter in that period. Indeed, before Frankel, Abernant was the last horse to be rated the best of his generation by Timeform at two, three and four years.

Abernant was beaten, through greenness, on his two-year-old debut at Lingfield, but thereafter carried all before him over five and six furlongs to become the best British juvenile of 1948. His five victories that year included the National Breeders’ Produce Stakes – now the National Stakes – at Sandown, the Chesham Stakes at Royal Ascot, the Champagne Stakes at Doncaster and the Middle Park Stakes at Newmarket.

Following a successful reappearance at Bath, over seven furlongs, Abernant was sent off odds-on favourite for the 2,000 Guineas at Newmarket; after trying to make all, was caught close home and beaten a short head by his old rival Nimbus, whom he had beaten six lengths in the Champagne Stakes. Thereafter, he reverted to specialist sprint distances, winning the King’s Stand Stakes at Royal Ascot, King George Stakes at Goodwood and Nunthorpe Stakes at York, all over five furlongs, and the July Cup at Newmarket, over six furlongs.

In 1950, as a four-year-old, Abernant won the King George Stakes, Nunthorpe Stakes and July Cup again and in the King’s Stand Stakes was beaten only by the very useful three-year-old Tangled, to whom he was conceding 23lb. Abernant was retired at the end of the season with ‘nothing left for him to win’, according to Noel Murless.