Mishaps and Mayhem at the Grand National 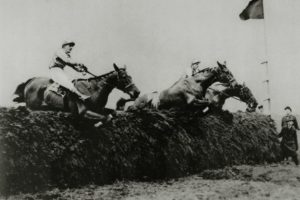 With any global level sporting event it’s vital that everything is running like clockwork. You can’t very well have the floodlights going out in a World Cup final or the starting pistol not working in the Olympics 100m dash. The very same applies to the Grand National. Surely one of the most recognised and respected horse races in the world, the Grand National attracts massive domestic and worldwide audiences. With that in mind, it becomes a must to iron out any potential kinks in the proceedings. But of course everyone and everything is fallible and there are enough factors at play for things to occasionally go awry. So , I present to you, the mishaps and mayhem at the Grand National

Often we hear the description, ‘a two horse race’ but perhaps it’s never been more true than at the 1928 grand national. Of course, it’s hard to tell from year to year how many horses will actually complete the gruelling Grand National course and its tricky hurdles, but it’s safe to say that the obvious answer isn’t two! To top off the madness, the eventual winner, Tipperary Tim, was a 100-1 shot. In fact even the 2nd place horse, Billy Barton, had fallen too, but the jockey remounted. Some happy punters, and probably quite a few confused ones, that day!

Scared of your own shadow

There’s certain scenarios you don’t consider coming about as you’re selecting your Grand National betting tips. You might not be familiar with the details, but this incident involving Devon Loch in the 1956 Grand National, has been televised and viewed on YouTube countless times. In a ‘what could possibly go wrong?’ moment never to be forgotten, Devon Loch snatched defeat from the jaws of victory just 40 yards from the finish line. The horse jumped, seemingly for no reason, before performing what can best be described as a cross between the splits and a belly flop, right in front of owners, the Queen and the Queen Mother. All of this led to its closet rival ESB breezing to victory is unexpected fashion. Many theories have been posited as to what happened on that fateful day, ranging from being scared of his own shadow, to imagining that there was a jump there. Should have gone to Specsavers?

We’re into the modern age with this third and final bizarre incident from the 1993 Grand National. The starter may as well have said ‘On your marks, get set, don’t go’, as the start was botched not once but twice. On the second false start several of the jockeys didn’t get the message that they’d been called back, leading to mayhem as some returned to the start line whereas the majority made their way around the track. In all 30 of the 39 runners carried on racing and consequently the race was declared void. To many it’s known as the Grand National that never was, though due to the cancellation of the 2020 Grand National we now have another year that ticks that box. The winner was Esha Ness, but under such conditions sadly it’s not a victory that counts for much, if anything.

With this zany recap, let’s hope that we’ve got the madness out of our system and that the Grand National 2020 goes off like a dream. Enjoy the race!