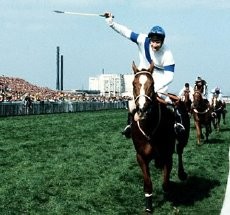 It’s often said that there’s always a story to be told about the Grand National winner, but, perhaps, none quite so compelling as that of Aldaniti and his jockey Bob Champion. The form book records that, in 1981, Aldaniti, who was sent off at 10/1 second favourite, won the Grand National by 4 lengths from 8/1 favourite Spartan Missile, but the race result was merely the final chapter of a fairy tale that had begun two years earlier.

Owned by the late Nick Embiricos and trained by the late Josh Gifford in Findon, West Sussex, Aldaniti was talented, if injury-prone, steeplechaser. In 1979, he had been placed in the Cheltenham Gold Cup and the Scottish Grand National at Ayr before fracturing a hock-bone at Sandown Park in November, which led to another lengthy layoff.

Stable jockey Champion, meanwhile, had been diagnosed with testicular cancer in July, 1979, and had undergone a punishing course of chemotherapy. However, both horse and jockey recovered sufficiently to be reunited in the Whitbread Trial Chase at Ascot in February, 1981. Despite starting the outsider of eight, at 14/1, Aldaniti won with something in hand and, two months later, took his chance in the Grand National.

The rest, as they say, is history. Carrying 10st 13lb, Aldaniti landed steeply at the first fence and was untidy at the last, but jumped impeccably in the main to record what had appeared, just months earlier, a hugely unlikely victory. Aldaniti and Champion returned to Aintree again in 1982, but parted company at the first fence. Nevertheless, their almost miraculous win in 1981 remains one of the greatest moments in the illustrious history of the celebrated steeplechase and is commemorated by the 1984 film, ‘Champions’, which starred Aldaniti as himself and the late John Hurt as Bob Champion.