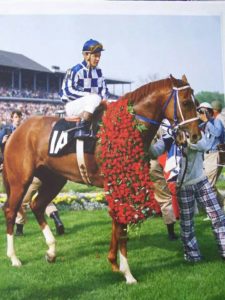 Secretariat’s debut race occurred on 4 July 1972 with jockey Paul Feliciano riding in the saddle. Despite a strong start, Secretariat could only manage a fourth-place finish after being bumped by a fellow runner. Eleven days later, Secretariat recovered from his first race to win in his second start. Secretariat would later collect wins at the Sanford Stakes, Hopeful Stakes, Futurity Stakes, Laurel Futurity and the Golden State Futurity to finish out his rookie year.

The stallion’s incredible collection of wins set him up for a tremendous three-year-old season. The year started out with Secretariat becoming syndicate owned. He became the most expensive syndicated horse in the world at $6.08 million as fears of his owner Penny Chenery being forced to sell the horse increased.

On the track, Secretariat ran his first race on March 17 in the Bay Shore Stakes. The race ended in a win for Secretariat and jockey Ron Turcotte, who had taken over the saddle in the middle of the 1972 season. The Gotham Stakes was won by the duo, but just as easily as Secretariat had won twice already, the stallion lost at the Wood Memorial in his final preparation race for the Kentucky Derby. The horse’s stamina was questioned due to his loss. However, weeks later, Secretariat put those questions to bed as he won the Kentucky Derby in a record time of 1:59 2/5.

The Kentucky Derby was the first jewel in the Triple Crown and it wasn’t long until the other two were attained by Secretariat. His Triple Crown win made him the first horse in a quarter century to accomplish the feat. Following his tremendous feats of 1973, Secretariat was retired and began life as a stud.

In October 1989, Secretariat was put down after acquiring a hoof condition known as laminitis. Despite dying as a result of the affliction at the age of 19, memories of Secretariat’s incredible career persist. Secretariat’s image was even put on a US postage stamp to commemorate his incredible Triple Crown win in 1999.